How to cook Fried leek and egg dumplings? 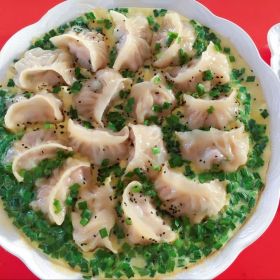 I bought dumpling wrappers off-the-shelf. I bought half a catty for two plates, about 36 pieces. Each plate only used 16 pieces, a total of 32 pieces. If you just make one plate, you don’t need so much. If you want to make more dumplings, you can buy more.
Print Pin Rate
Course: Main Course
Cuisine: Chinese
Keyword: Fried leek and egg dumplings
Prep Time: 10 mins
Cook Time: 30 mins
Servings: 2
Calories: 1309kcal
Author: Jerry Ye

1. If making dumplings is too troublesome, you can buy quick-frozen ones~ 2. Remember to keep low heat during the frying process, otherwise it is easy to cause the bottom to be burnt and the eggs are not cooked yet. You can cook dumplings on medium heat.